The Herbs We Use

Reviews: to leave a review (please do), click on “reviews” to the left

445 mg capsules in a sealed zip-lock bag.  Made from the whole dried leaves imported from Africa.

This product is offered for use as directed by your healthcare provider or a qualified traditional Asian herbal practitioner.

Although Sida Acuta is not of the Ephedra species, and ephedrine is not a major constituent of the herb, Sida Acuta does contain trace amounts of ephedrine.

Sida Acuta reportedly does not contain enough ephedrine to be a useful source of ephedrine.

However ephedrine is reported to be synergistic with caffeine, aspirin, and reportedly St. John’s Wort and possibly other substances, which could lead to some of the serious side effects related to ephedrine.

Those serious side effects can include but are not limited to:

In addition to the ephedrine issue, Sida Acuta has wide ranging traditional herbal uses as well as contraindications that Sida Acuta should not be used during pregnancy, or by women trying to get pregnant without the direction of a healthcare provider which make it imperative that Sida Acuta be used under qualified supervision.

This statement has not been evaluated by the FDA. This product is not intended to diagnose, treat, cure, or prevent any disease.

There are no reviews yet.

Be the first to review “Sida Acuta capsules” Cancel reply 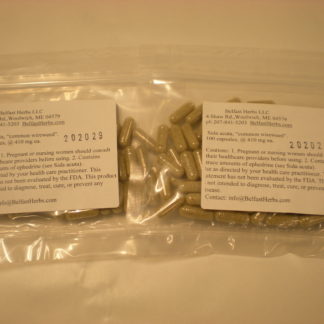